Calculator.tech / blog / How Can We Calculate Significant Figures During Math Class? 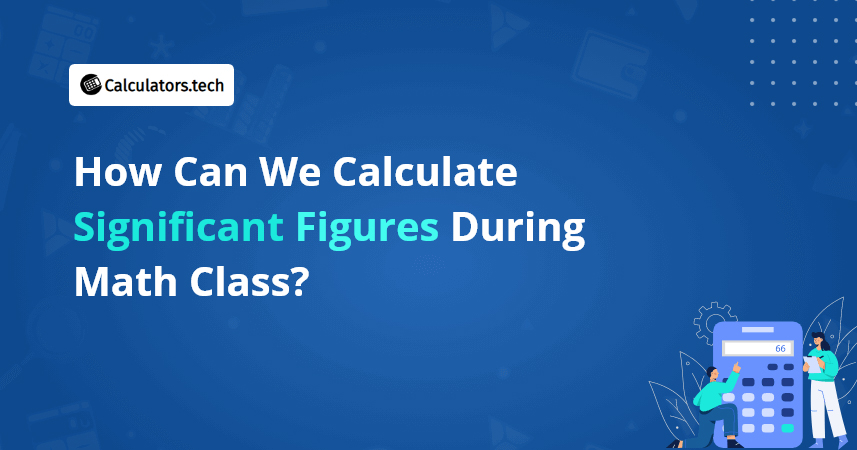 How Can We Calculate Significant Figures During Math Class?

When you are in your math class working with different mathematical values and operations, you often come across problems that require you to use significant numbers from the value.

If you are a student of mathematics, then you need to know how to calculate significant figures.

Learning this is absolutely essential if you want to be accurate and precise with your mathematical calculations.

This is what we are going to talk about in this detailed guide. We are going to share with you everything that you need to know about Significant Digits and the best methods that you can use to calculate them during your math class.

What are Significant Figures?

Significant Numbers are the digits in a number that contribute to the precision and accuracy of that number. They are also regarded as the meaningful digits that convey the message that a value is supposed to convey.

Finding significant figures give you a result that you can use in the different mathematical calculation to produce consistent results with extreme accuracy.

Whether you are rounding numbers or you want to present a value in its scientific notation, you need to be able to determine the significant numbers in the value before you do anything else.

Throughout the rest of this article, we are going to talk about the complete process that you can use for finding significant figures in math class.

How Can We Calculate Significant Figures During Math Class?

Scientists have developed a systematic approach for finding significant figures. This approach features a certain set of rules that anyone can use to find significant digits in a given value.

Students are expected to learn and memorize these rules to make the significant digits identification easier and faster for them.

Here is the complete set of rules that you need to follow when calculating significant figures in your math class.

When working with a value, all non-zero digits of the value would be significant.

When you are given a value that only has non-zero digits, then you need to consider all of them significant. This is because these are the values that have been calculated.

If the value that you are working with has one or more zeros between two non-zero digits, then those zeros will also be Significant.

Let’s take the help of an example to understand the concept a little bit better. If you have a number such as 0.679009, it has 6 significant digits. This is because the rule states that if zeros come in between 2 non-zero digits, then they are also significant.

This rule is quite simple and eliminates the risk of considering zeros as insignificant digits all the time.

If you are working with a decimal point term and there are zeros on the right side of the decimal point that is not followed by a non-zero digit, then those zeros will be significant.

Consider the example of the number 72.00. This term has 4 significant digits when you look at it as per the terms defined in the rule. You can’t discard the zeros on the right side of the decimal point because they don’t have a non-zero digit after them.

This rule states that the zeros that are placed on the immediate right of a decimal point and the left of the non-zero digits are not significant.

The zeros are all insignificant as per the rule. You can look at it from the angle of writing the scientific notation for this number. You are going to discard the zeros for that and only work with the 4 digits mentioned above.

Hence, those digits are the only significant ones in this value.

Zeros that are placed on the right side of the last non-zero number in a decimal point value are significant.

Consider the number 0.00783400. This term has 6 significant digits as per the rule stated above. This rule is quite straightforward and should become clear with the example that we have given here.

There are various other rules for significant figures that you’ll find out there. But the ones mentioned here are all that matter as these are the ones that you will most likely come across.

Use the Sig Fig Calculator to Easily Calculate Significant Figures

When you are in your math class and you want to quickly find the significant digits in a value, you can use the SigFig Calculator for that.

This calculator saves you from the hassle of using the rules to identify significant numbers.

The tool works on the same rules, so you don’t have to memorize them yourself. You can simply just add in the value that you want to work with, in this tool.

After that, the tool processes the value to give you the exact number of significant digits in the value

So, when you are in your math class next time, utilize our free online Sig Fig calculator tool to quickly and accurately find out the number of significant figures in your input value.